In most cases the side effects of rhodiola tend to be minimal, but you can help yourself avoid them by taking some basic precautions. To understand how and why these side effects might occur, however, it is important to learn some simple chemistry, including how rhodiola rosea works to create the physical and physiological effects so many people desire from this supplement.

I’ve organized this guide so you can discover as much or as little as you want. If you’re feeling impatient and just want to see the list of rhodiola rosea side-effects, feel free to skip to that section with the following navigation.

Rhodiola Rosea provides a wide selection of potentially potent compounds which may be the origin of both its positive and negative effects. The most publicized compounds are a class of rosavins which include rosin, rosarin and rosavin itself. (Please note that the name Rosavin also happens to be a specific brand of rhodiola extract.)

However studies suggest that the most active compounds in rhodiola rosea — the most proven of adaptogens — are likely tyrosol and rhodioloside. It is also important to note that when these components have been tested in isolation, no consistent, measurable effects were observed. Thus rhodiola rosea side-effects appear to be a synergistic result of the tyrosol and rhodioloside acting with the rosin, rosarin and rosavin.

Additional components that may contribute to rhodiola rosea include rosiridin, rhodiolin, rhodioniside and salidroside. However, most studies indicate that these polyphenols cause little in the way of measurable physiological effects in humans. For most people the rhodiola benefits outweigh the typically minimal side effects.

The phytochemical geraniol provides R. rosea’s distinct rose-like odor and thus its name, but according to current studies geraniol has no measurable impact on either humans or animals.

All current research suggests rhodiola rosea has a very low toxicity. Current toxicity studies indicate its LD50 (dose at which 50 percent of the tested animals perish) is about 28.6 ml/kg, or about 3,360 mg/kg.

For perspective, such dosage in a 70 kg (roughly 154 pounds) man would be 235 gm or 235,000 mg. Since most recommended doses are about 100 to 400 mg and the total recommended dosage for an entire day rarely exceeds 600 to 1000 mg, you can see there is a very large margin of safety, much larger than with apparent ashwagandha side effects.

How Side Effects of Rhodiola Occur

Most rhodiola side effects occur as a result of its effects on a delicate brain chemistry. Rhodiola rosea inhibits subtypes A and B of an enzyme called monoamine oxidase and effects opioid peptides like beta-endorphin.

But by increasing this brain chemical activity, R. rosea may also deplete these neurotransmitters, which can produce the complete opposite effects of those described above (less energy, less focus).

This is why there is some anecdotal evidence that a smaller rhodiola dosage may energize you while larger doses actually create a relaxed or even sleepy feeling.

We have not seen indications that rhodiola rosea can decrease one’s mood, but it is a theoretical, chemical possibility, particularly in individuals already prone to mood swings or people with bipolar disorder.

With that charming clinical tedium out of the way, let me get to the heart of the matter: rhodiola side effects.

The most common rhodiola rosea side effects include: 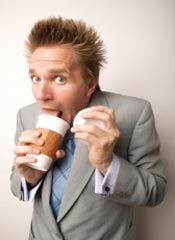 Essentially, these are the same common side effects often observed in any mild stimulant. For most people to perceive these rhodiola side effects, the rhodiola extract would need to be taken in higher-than-average doses or combined with another stimulant, such as caffeine.

However, some people are more sensitive to it than others, so it is always a good idea to start with small dose and slowly increase your dosage to the recommended dose.

If taken in high doses or especially if taken with another stimulant, the most disturbing rhodiola rosea side effect could be:

I’ve also heard anecdotal evidence that these side effects of rhodiola rosea can cause the “shakes” if you first spike your blood sugar by eating sweets on an empty stomach, then take an R. rosea supplement. This is avoidable: It isn’t a good idea to take rhodiola rosea when you have low blood sugar and can’t eat soon.

If you have hypoglycemia or diabetes and you want to try rhodiola rosea, I recommend you start with a very small dose to see how you feel, and make sure you plan on eating a healthy snack or meal no more than 30 to 45 minutes after you take it.

Taking rhodiola for depression is not uncommon, but one area where researchers urge caution is in clinical cases of any bipolar spectrum disorders. This includes Bipolar Disorder and Manic Depression. In these cases I suggest you avoid Rhodiola Rosea unless explicitly prescribed by a medial professional treating you.

In general, if you are prone to agitation, the jitters or excitability, be careful as rhodiola rosea may only exacerbate these qualities.

How to Avoid Rhodiola Side Effects

As I stated on the Rhodiola Dangers page, most of these symptoms of rhodiola side effects can be avoided by starting rhodiola in smaller doses than recommended, then working your way to the higher doses suggested on any specific rhodiola supplement label.

Do not exceed the higher end of the suggested dose, and do not combine rhodiola with other stimulants (like caffeine) until you are confident your body accepts rhodiola well and you’ve been taking it for some time.

Because of its restlessness and insomnia side effects, I suggest that you avoid taking rhodiola rosea in the later afternoon or evening and definitely not before bed. Side effects of rhodiola can impact your ability to obtain quality, restful sleep when it is taken later in the day.

There are a few additional ways to avoid most rhodiola rosea side effects.

The precursor to serotonin is tryptophan, and bananas are an excellent source of this amino acid. The precursor to dopamine is tyrosine, which can be found in cheese, milk and dark legumes like black beans.

So if you have recently started taking rhodiola rosea or if you have increased your dosage, adding these to your diet can help you avoid some of the negative consequences of the increased brain chemical metabolism created by taking R. rosea.

I hope this detailed guide to rhodiola side-effects, why they occur and how you can avoid them helps you feel more confident and informed in your rhodiola rosea usage.