The benefits of rhodiola include well-established uses proven in clinical studies as well as theoretical benefits, which several researchers feel confident exist but which haven’t yet been the subject of a specific controlled study. This guide to rhodiola rosea benefits acts as an accessible guide to Dr. Zakir Ramazanov’s pioneering research (Dr. Ramazanov founded RhodiolaRosea.org). To view his research directly, view the PDF section listed in the sidebar of this website (keep in mind many of these can be pretty dry scientific documents).

Rhodiola rosea research — along with research on other medicinal herbs — comprised part of the Soviet Union’s zealous campaign to contend with the United States in many areas, including the arms race, science and medicine. It is neither a myth nor an unfounded legend that the KGB utilized this rugged little adaptogen to help toughen agents in the face of stressful conditions.

Rhodiola Rosea As An Adaptogen

Rhodiola Rosea has long been recognized as a powerful adaptogen. An adaptogen is a natural herbal substance that improves the body’s resistance while also normalizing its functions, particularly under rigorous or stressful mental or physical conditions.

How Do Rhodiola Benefits Occur?

If you have a healthy skepticism, you probably want to know how these benefits occur before you read a long list of beneficial properties.

This unique adaptogen inhibits subtypes A and B of the enzyme monoamine oxidase. It also appears to affect opioid peptides, which are chained amino acids, such as beta-endorphin, which functions as a neurotransmitter within your peripheral and central nervous systems. Some evidences also suggests these benefits occur because R. rosea modulates how the human body’s adrenal glands produce cortisol (the “stress hormone”) during periods of psychological or physical stress.

How do these chemical reactions benefit us? Subtypes A and B of monoamine oxidase, which you will sometimes see as MAO-A and MAO-B, metabolize serotonin (5-hydroxytryptamine or 5-HT) and dopamine (DA). By inhibiting this enzyme’s ability to metabolize these neurotransmitters (note: not stopping, but inhibiting), they remain in the brain longer and in higher concentrations (this is a layman way of looking at it, technically). Serotonin activity in your brain improves and stabilizes your mood. Dopamine activity in your brain makes you feel more confident, positive and motivated.

The cortisol modulation theoretically keeps this “stress hormone” from wearing you down because excessive cortisol may compromise your immune system and counteract insulin. Read on to learn more on how these functions of R. rosea might benefit you.

Many believe that rhodiola benefits include its use as a treatment in asthenic conditions, which develop as a result of exposure to intense physical or intellectual strain, influenza or other illness. Asthenic conditions include sleep disturbances, decline in work performance, poor appetite, irritability, hypertension, fatigue and headaches.

For example, in one study 40 students randomly received either 50 mg standardized rhodiola rosea extract or a placebo twice-a-day for twenty days. The subjects consuming the standardized extract exhibited statistically significant improvements in physical fitness, psycho motor function, and mental performance. For the most comprehensive essay you’ll ever find on rhodiola and muscle development, read Dr. Zakir Ramazanov’s essay on Rhodiola Supplements for Muscle Development. For an overview on how it improves your endurance, read Rhodiola Rosea Effects On Physical Work Capacity.

Rhodiola rosea came to prominence in the United States after a comprehensive study conducted by the Swedish Herbal Institute evaluating its use for depression. The results of this study made waves for strongly suggesting the use of rhodiola rosea for treating mild depression and anxiety. You can read about the details of this study in my Rhodiola For Depression essay. 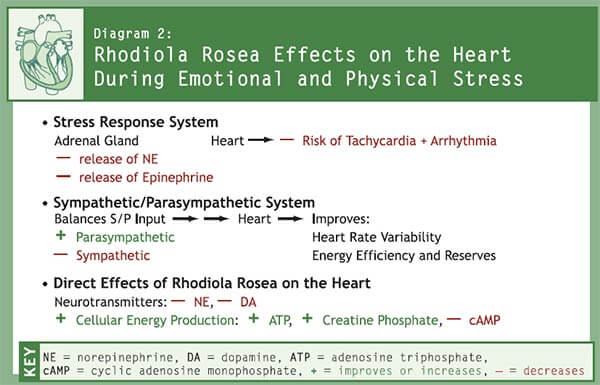 How R. Rosea Helps the Heart During Emotional and Physical Stress

Additionally, Newsweek magazine covered this herbal stress buster in 2003. You can now view that original article, reformatted and updated for the web, here: Herbal Stress Relief.

Some studies also indicate that it may be effective in treating cardiac afflictions caused or provoked by stress. Its mechanism for these circumstances is in its ability to lessen the corticosteroids and catecholamines secreted by adrenal glands while a person endures stress. A series of double-blind, placebo-controlled studies jointly conducted by Swedish and Russian researchers suggests Rhodiola may be beneficial for the heart. Read more on this research here: Rhodiola Rosea Cardioprotective Effects

Another potential rhodiola benefit may be that it increases anti-tumor activity by improving the body’s resistance to toxins. A range of anti-oxidant compounds have been discovered within rhodiola rosea and considerable free-radical scavenging action has been exhibited in extracts (both alcohol-based and water-based). Research is currently being conducted on whether or not it can be defined as a legitimate cancer treatment, or at least as a safe supplement to be used to help patients endure chemotherapy.

R. rosea extract both protects and stimulates the immune system by reestablishing homeostasis — or metabolic balance — in our body. 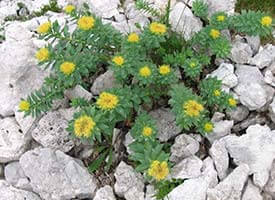 The Rugged Adaptogen In the Wild

In clinical animal studies, rhodiola rosea extracts appear to heighten the transfer of serotonin precursors tryptophan and 5-HTP (or 5-hydroxytryptophan) into our brains. Serotonin is a broadly analyzed brain neurotransmitter chemical, which appears to be involved in several functions, including temperature regulation, appetite, pain perception, behavior, blood pressure and respiration.

Many other benefits are believed to exist and may soon be proven through clinical trials. These possible benefits include the ability to amend hearing, to regulate blood sugar levels for diabetics and to protect the liver from environmental toxins. In addition, some early studies indicate rhodiola rosea may activate the lipolytic operations (fat breakdown) and mobilize lipids from adipose tissue to the natural fat burning system of the body for weight reduction.

One reason these benefits of rhodiola enthuse researchers is that there appear to be very few significant rhodiola side-effects, something weighing down many pharmaceutical treatments and even a few natural supplements sold over-the-counter.

As I learn about new studies conducted to address specific rhodiola benefits, I will add them to my site.